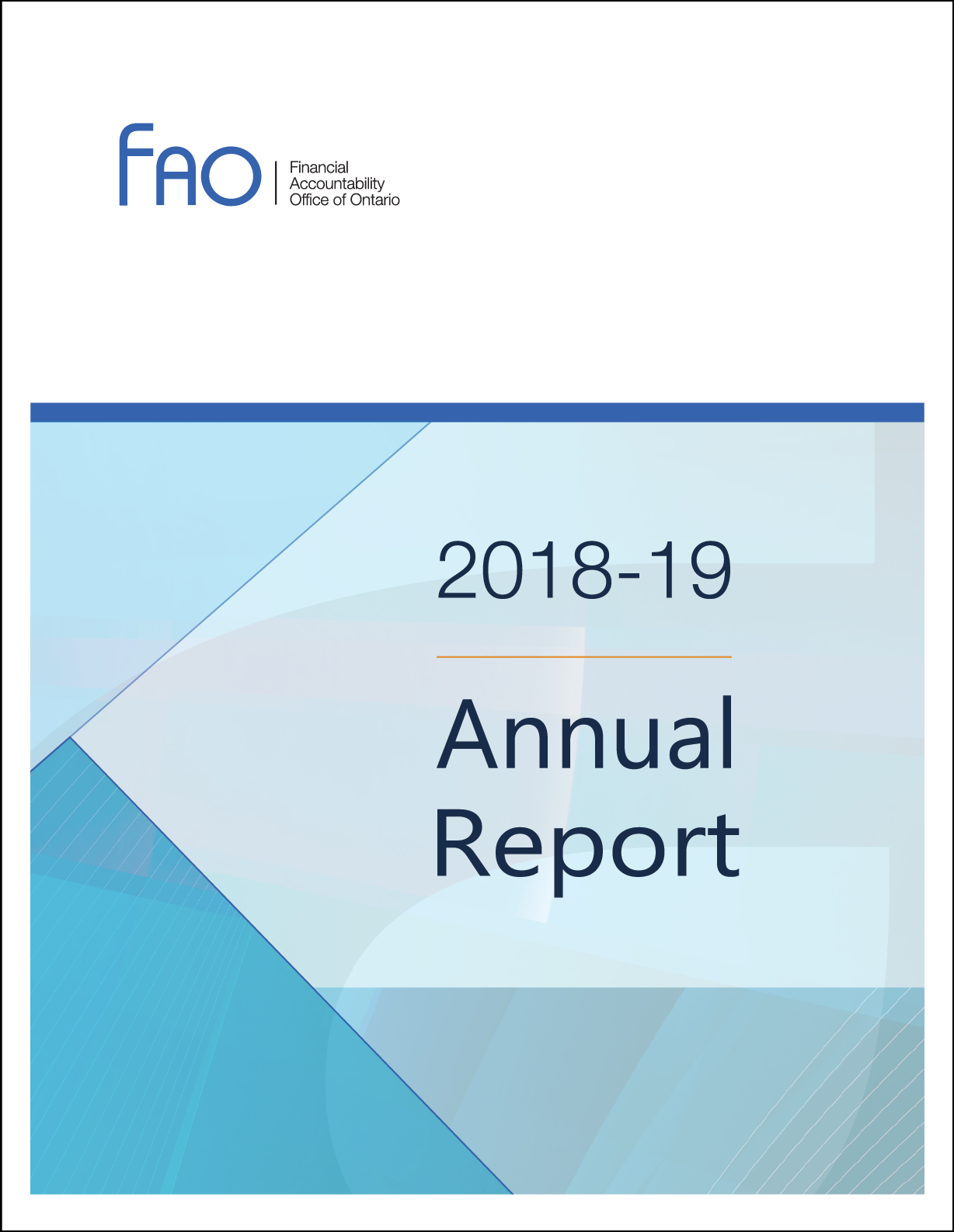 The Honourable Ted Arnott
Speaker of the Legislative Assembly of Ontario

In my role as the Financial Accountability Officer of Ontario, I am passionate about the support we provide to Members of Provincial Parliament, helping them undertake their core constitutional responsibilities of holding the government to account.

I am extremely fortunate to work alongside a tremendous team who are also passionate about the work they do, be it researching and writing highly technical, but still accessible, reports or supporting those reports with effective and innovative communication tools; as well as an efficient and professional back-office team.

My team and I work diligently to provide MPPs with analysis and tools that allow them to better understand the Province’s economic and fiscal position. We believe that well-informed MPPs can ask better questions of the government and are also better able to explain to constituents the economic and fiscal impacts of government actions.

This annual report describes the FAO’s mandate and illustrates how our various reports assist and support MPPs. As would befit an analytical organization, there are many charts and graphs that provide the reader with a sense of the scope and nature of our research and the work that we do.

Some notable reports this year included: the FAO’s first review of the annual Expenditure Estimates; a financial review of the decision to cancel the cap and trade program; a retrospective on family incomes in Ontario; a comparison of Ontario’s fiscal position with other provinces; an analysis of the government’s business support programs; a financial analysis of the OLG’s expansion and sale of operations in the Greater Toronto Area; a spring budget outlook that analyzed the fiscal impact of the previous government’s 2018 budget measures in advance of the provincial election; and a fall budget outlook that provided a baseline medium-term fiscal outlook in the absence of one from the government.

In May of 2018, I was honoured to be named Ontario’s Financial Accountability Officer. Shortly afterwards, Ontario held a general election that resulted in almost 60 per cent of all MPPs being newly elected to the Legislative Assembly. Consequently, my focus for this year has been to ensure that MPPs understood the mandate of the FAO and the tools and support we provide to assist them in their role of holding the government to account.

We are off to a good start. Our engagement with MPPs has increased significantly, through committee appearances, one-on-one meetings with MPPs and their staff, technical presentations that accompany the release of our reports, general presentations through the Legislative Library, presentations to caucus and caucus sub-groups, and through ongoing email and phone calls as well as written communication.

At the same time, we have focused on expanding our analytical capacity as well as updating and improving our operational effectiveness and processes. We have invested in our research and data collection capacity, and in developing collaborative work processes that help us remain flexible and responsive to MPP requests. We have developed a new series of reports to support the Standing Committee on Estimates and are exploring and developing new and innovative ways to provide MPPs with access to more detailed government spending data and analysis tools via an online portal. Lastly, we expect to be fully staffed by the fall of 2019 for the first time since this office was created.

The FAO provides its analysis to MPPs in the form of public reports and shorter commentaries, all of which are posted and available on the FAO’s website.

A primary theme of the FAO's work, and an important aspect of its mandate, is the bi-annual release of the Economic and Budget Outlook (EBO) reports, which provide an independent economic and fiscal projection for the province. The EBO reports are intended to support MPPs’ scrutiny of the government's budgets and fall economic statements. 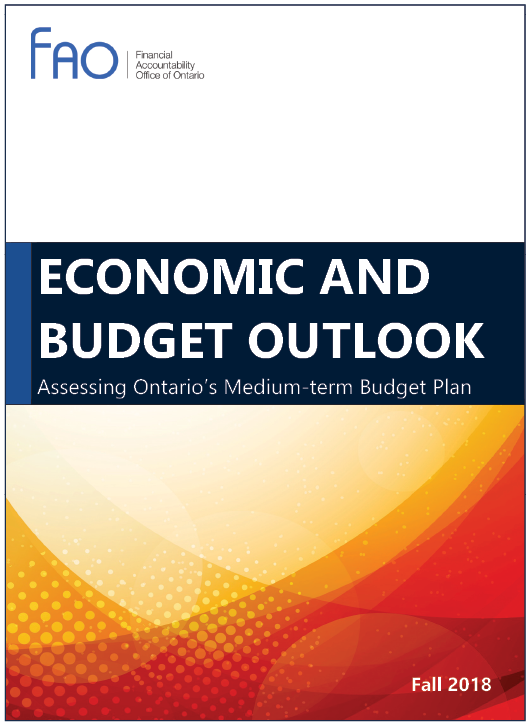 The FAO also releases Long-term Budget Outlook (LTBO) reports every two years, which assess the budget implications of maintaining the province’s current fiscal structure as Ontario’s population transitions over the coming decades. The first Long-term Budget Outlook report was released in the fall of 2017 and the FAO will release an updated long-term outlook in the winter of 2020. These reports examine the long-term fiscal impact of Ontario’s growing and aging population, as well as the government’s performance against fiscal anchors – notably the debt-to-GDP ratio.

The FAO also regularly releases shorter commentaries on major economic and fiscal developments, providing insights into the implications for the economy or the government's fiscal plan.

An example of a recent commentary is the annual assessment of Ontario’s labour market. Despite generally strong employment growth, the labour market commentaries have also been tracking ongoing challenges in the labour market, including; still elevated levels of long-term unemployment; the rise of precarious employment (notably involuntary part-time and contract jobs); and the continuing gap between male and female wages.

The FAO also publishes reports on special topics that examine and analyze important economic trends. An example is the Income in Ontario report, which reviewed trends in the growth and distribution of family incomes of Ontarians over the last 15 years. 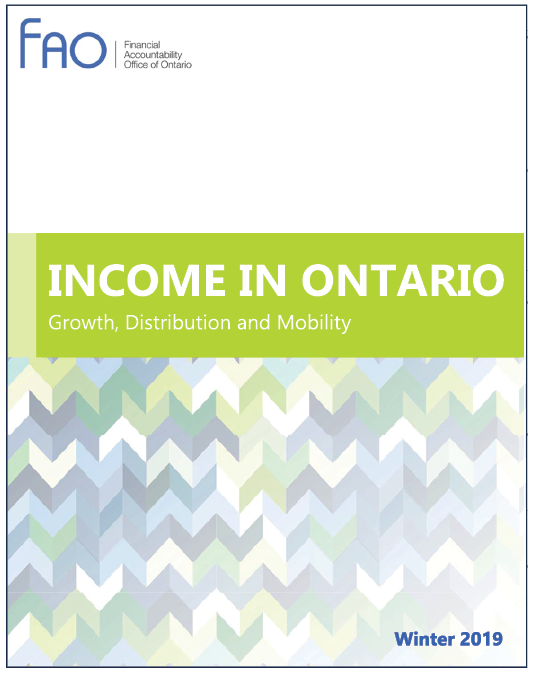 The FAO's assessment showed income growth for middle-and lower-income Ontario families has been slow. Between 2000 and 2016, Ontario recorded the slowest growth of median family income among all provinces by a wide margin. The market income[1] of the median Ontario family declined over this period (after adjusting for inflation), while it grew everywhere else in Canada. On an after-tax and government transfer basis, growth in median family incomes in Ontario was still, by far, the slowest in Canada since 2000.

It’s worth noting that the FAO’s Economic and Budget Outlook reports typically provide a medium-term (or 5-year) projection. The 2018 fall EBO followed the release of the new government’s first Ontario Economic Outlook and Fiscal Review.

In a departure from usual practice, the government chose not to include a medium-term outlook in its 2018 Ontario Economic Outlook and Fiscal Review. Consequently, the FAO's fall EBO report became the only medium-term fiscal outlook available to MPPs, helping them understand the cumulative fiscal impact of government policy decisions that included cancelling the cap and trade program, scaling back or cancelling many new spending and revenue policies from the 2018 Ontario Budget, and paralleling business tax changes introduced by the federal government.

In another commentary, the FAO examined Ontario’s fiscal position – specifically Ontario’s spending, revenues and debt – compared with that of other provinces. In 2017, the Ontario government reported $10,415 in total revenues per person, the lowest in the country and well below the rest of Canada average of $12,373 in revenues per person.

Ontario’s low per capita revenue is matched by similarly low government spending relative to other provinces. In 2017, Ontario spent $9,829 per person on programs, also the lowest among provinces – approximately $2,000 per person lower than the rest of Canada average. Overall, comparing Ontario’s fiscal position with other provinces provides important context for MPPs when assessing the government’s future fiscal plans.

In 2018 – 19, the FAO produced its first formal review of the annual Expenditure Estimates. The FAO’s review provided MPPs with an explanation of how the spending plan in the 2018 – 19 Expenditure Estimates aligned with the government’s 2018 Ontario Economic Outlook and Fiscal Review and also analyzed the Province’s five largest spending programs. 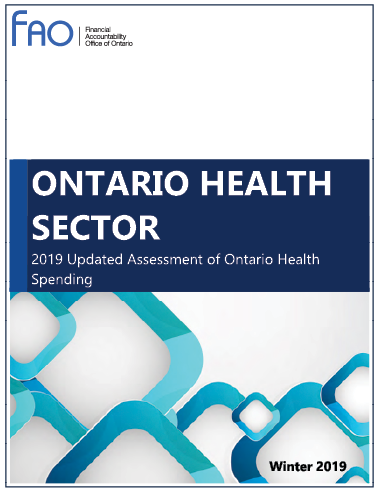 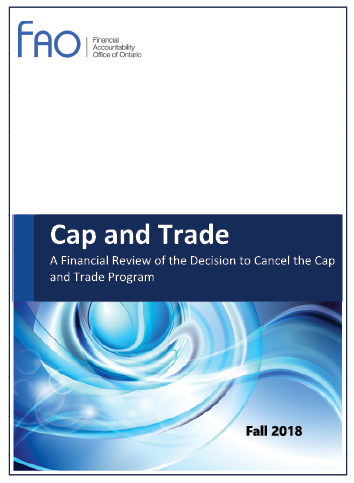 The FAO undertakes financial analysis of specific programs and policies, often at the request of MPPs. In 2018 – 19, work completed by the FAO included:

Use of the FAO’s Work 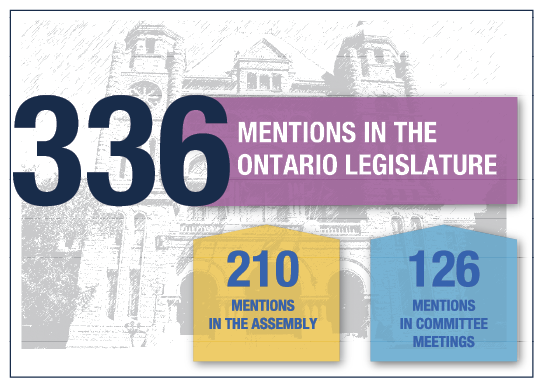 The FAO's work is used by MPPs, committees, media and the public to inform debate about economic and fiscal policies issues in Ontario. One of the more visible examples of the FAO’s support to MPPs, is their mention of FAO work in the Legislature.

In 2018 – 19, the FAO or the FAO’s publications were referenced and mentioned 210 times in debate in the Assembly and 126 times in committee meetings for a total of 336 references.

Requests from MPPs and Committees

MPPs and committees can both request that the FAO undertake research related to the FAO’s statutory mandate. 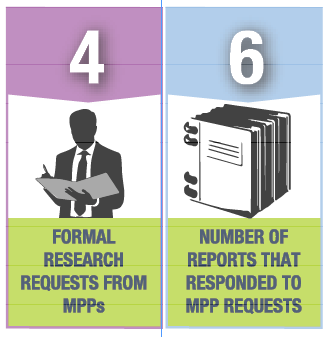 Ministries and public entities have a statutory duty to provide the FAO with information that the Officer believes necessary to perform his mandated duties, subject to only limited exceptions.[2]   In addition, two orders in council allow the FAO to access certain information contained in Cabinet records from the current Executive Council, presided over by Premier Ford, and the previous Executive Council, presided over by former Premier Wynne.

The orders in council, combined with ministries’ and public entities’ improved understanding of their duty to provide the FAO with information, has helped ensure that the FAO has access to the information required for its work.

Although the FAO has access to a wide range of information, the Financial Accountability Officer Act, 2013 and the orders in council place important restrictions on the FAO’s disclosure of government information.[3]

The FAO has put in place internal processes that ensure information subject to these restrictions is not disclosed. As part of these processes, the FAO works closely with ministries and public entities to ensure that they provide the advice that the FAO requires to comply with the disclosure restrictions.

The FAO spent less than the office’s approved budget in 2018 – 19. This was the result of the new Officer, having been appointed in May 2018, delaying any significant new hiring while the office developed its strategic and operational plans, having been operating in a caretaker mode for much of the previous two fiscal years.

Spending in 2018 – 19 was higher than the previous year, due to increased office activity as reflected by the higher number of FAO publications released in 2018 – 19. In addition, new investments were made to expand the office’s analytical capacity and improve operational effectiveness.

The FAO is a small office that produces a significant number of analytical reports that deal with the complex subject of the Province’s economy, the government’s finances and program spending. There is considerable effort within the office to ensure that we are recruiting and retaining the right staff, providing a stimulating work environment, and providing the proper tools, training and support to ensure the entire team can contribute their best efforts.

The FAO is always mindful that it has been entrusted with taxpayer’s funds that must be spent wisely and effectively. The office is in the process of restructuring its administrative functions. Work is also ongoing to strengthen policies and practices in information management, human resources, operations management and communications. This will allow the FAO to continue to serve MPPs effectively and provide value, while managing the increasing volume of requests for analysis and information that has resulted from the FAO's outreach efforts over the past year.

1    Market income is before taxes and government transfers.

2    The exceptions are Cabinet records, personal information and personal health information. See s. 12(2) and (3) of the Financial Accountability Officer Act, 2013.