In the 2016 Economic Outlook and Fiscal Review - commonly referred to as the Fall Economic Statement (FES) - the Ontario government (the Province) reaffirmed its commitment to eliminate the budget deficit by 2017-18 and maintain a balanced budget going forward. By comparison, the Financial Accountability Office (FAO) projected budget deficits of $5.2 billion in 2016-17, $2.6 billion in 2017-18 and a steady deterioration to $3.7 billion by 2020-21.[1]

Based on the FAO’s analysis of the FES, the Province’s plan to balance the budget continues to rely on optimistic assumptions for revenue growth and program spending restraint. As a result, there is significant risk that the government may not be able to eliminate the deficit in 2017-18, nor maintain a balanced budget going forward. However, the government has a variety of tools that it could use to temporarily improve the budget balance in 2017-18.[2] Beyond 2017-18, maintaining a balanced budget will likely require additional measures to raise revenues or reduce expenses. 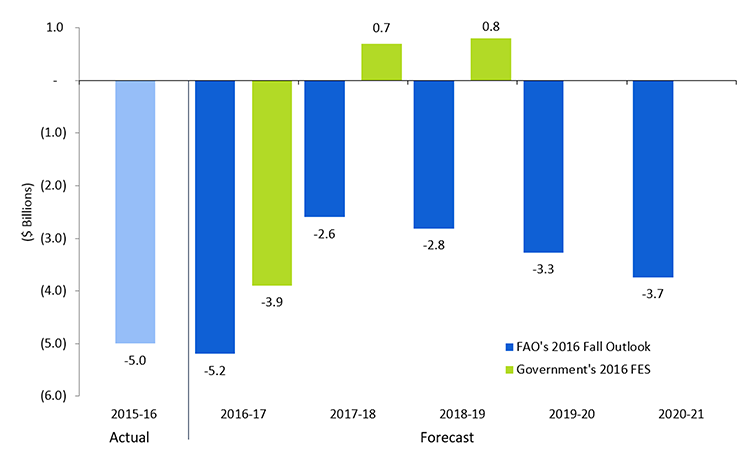 * Budget balance excludes reserve, and includes the accounting change. The FES does not include fiscal projections for 2019-20 and 2020-21.
Source: Ontario 2015-16 Public Accounts, Ontario 2016 Fall Economic Statement, and FAO

In particular, the government’s forecast for personal income tax (PIT) is more than $1 billion higher than the FAO’s projection in each year of the outlook. The FAO’s lower PIT projection reflects an adjustment to account for income shifting by high-income tax filers, consistent with estimates from the federal government.[3]

The government’s forecast for Corporations Tax revenue is also significantly higher than the FAO’s projection over the outlook, a result of stronger 2015 corporate tax assessments and a more optimistic forecast of corporate profit growth.

The government’s revenue forecast also incorporates stronger growth than the FAO’s projection for other taxes, including the Harmonized Sales Tax, Gas Tax, Land Transfer Tax and the Ontario Health Premium. 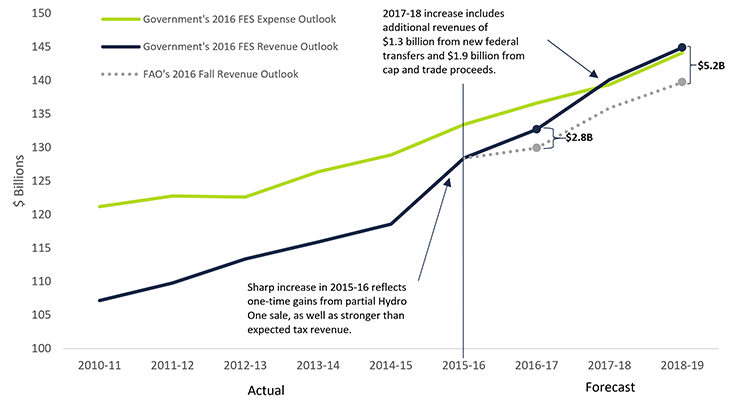 In addition to the government’s optimistic tax revenue projection, the FES outlook also assumes $1.3 billion in new federal transfers and $1.9 billion in cap and trade proceeds by 2017-18[4] -- assumptions which are incorporated into the FAO’s projections. If tax revenue growth disappoints, or these new revenue sources fall short of expectations, the Province’s fiscal targets would be at risk.

The government’s program expense forecast is roughly $800 million above the FAO’s projection by 2018-19. This is due to higher expense from the change in the accounting treatment of jointly-sponsored pensions, partially offset by lower than expected spending on programs announced in the September Throne Speech.

Based on public statements by the government, the FAO assumed that program spending would increase by $1.8 billion annually to fund the HST rebate for electricity and expanded child care spaces announced in the September Throne Speech. However, the FES reported program expense only $0.4 billion higher in 2018-19 compared to the 2016 Budget, suggesting that these new initiatives may be partially funded though reallocations from existing programs or the contingency funds.[6] In addition, government officials indicated that since the policy details for the child care expansion are still being developed, the final cost of the program has not been fully incorporated into the FES fiscal plan.

With contributions from Edward Crummey, Mario Angastiniotis, and Nicolas Rhodes.

[4] As discussed in the FAO’s report - An Assessment of the Fiscal Impact of Cap and Trade - there are three key factors which will determine the amount of revenue raised from cap and trade: the price of allowances; the Canada-US dollar exchange rate; and the number of allowances the Province will sell.  Each of these factors are subject to significant uncertainty.

[5] In the 2015-16 Public Accounts, the Province legislated a change in the accounting treatment of jointly sponsored pension plans, which increased net debt by $10.7 billion and the deficit by $1.5 billion in 2015-16. The FAO will adopt the government’s estimates of the accounting change’s impact in future reports.

[7] The FES incorporated an upward revision in nominal GDP for 2015 from Statistics Canada’s Provincial Economic Accounts (PEA), released on November 9, 2016. The revision lowered the net debt-to-GDP ratio relative to the FAO’s fall report, which was published prior to the release of the PEA

Revenue Outlook
This chart compares the Government’s 2016 FES revenue forecast with the FAO’s 2016 Fall Outlook revenue forecast. The chart shows the sharp increase in actual revenue growth in 2015-16, due to one-time gains from the partial sale of Hydro One, as well as stronger than expected tax revenue.