The Financial Accountability Office of Ontario (FAO) expects the Province's net debt to rise by over $50 billion by 2020-21 to $350 billion, largely because of the Province’s 12-year $160-billion capital plan.[1] Understanding the nature of the risks of debt to the Province’s fiscal plan can help Members of Provincial Parliament (MPPs) in assessing any debt management and/or reduction strategy.

How has Ontario’s net debt evolved over time?

In absolute terms, Ontario’s net debt was the highest among Canadian provinces at $296.1 billion on March 31, 2016.[4] Ontario’s net debt increased significantly during the 2008-09 recession, and grew by $139 billion between 2007-08 and 2015-16 (Figure 1). In its 2009 budget, the Province committed $32.5 billion over two years to new infrastructure under its fiscal stimulus program to counter the effects of the economic recession.[5] This plan, combined with a decrease in revenues has led to budget deficits since 2008-09, which contributed to an increase in Ontario’s borrowing requirements. For instance, 56.2 per cent of the additional borrowing by the Province in 2009-10 financed the deficit, while 25.8 per cent financed capital spending.[6] The FAO expects that Ontario’s net debt will continue to rise due to annual deficits from 2018-19 to 2020-21 and the Province’s sustained spending on capital.[7]

Sources: FAO analysis of data from the 2014-15 Fiscal Reference Tables, Ontario Public Accounts, Ontario 2016 budget, and Statistics Canada.
Note: The FAO has estimated financial assets for 2015-16 based on the 10-year average annual growth of financial assets, f=forecast
Due to a break in the series, data from 2001-02 onward are not directly comparable with earlier years.

How does Ontario’s net debt compare to that of other large provinces?

When comparing provincial government debt, it is important to take into account differences in the sizes of provincial economies, populations and provincial revenues. This section examines four different indicators of debt burden in order to provide a more comprehensive comparison of provincial debt.

An alternate and more direct measure of the Province’s debt burden is net debt relative to revenues (Figure 2 Panel C), which shows the increase in revenues that would be required to pay back the debt. Using this measure, Ontario had the highest debt burden among the major provinces in 2014-15, carrying $2.40 in net debt for each dollar of provincial revenue.

Another indicator used to measure the costs associated with indebtedness is interest payments relative to revenues (Figure 2 Panel D). This measure shows the Province’s ability to pay interest on its debt and has remained steady over the last decade, at around nine per cent. Despite this stability, interest expense will be the third largest expense for the Province in 2016-17 according to the 2016 Ontario budget. The Province spends more to service its debt than it does on postsecondary education. 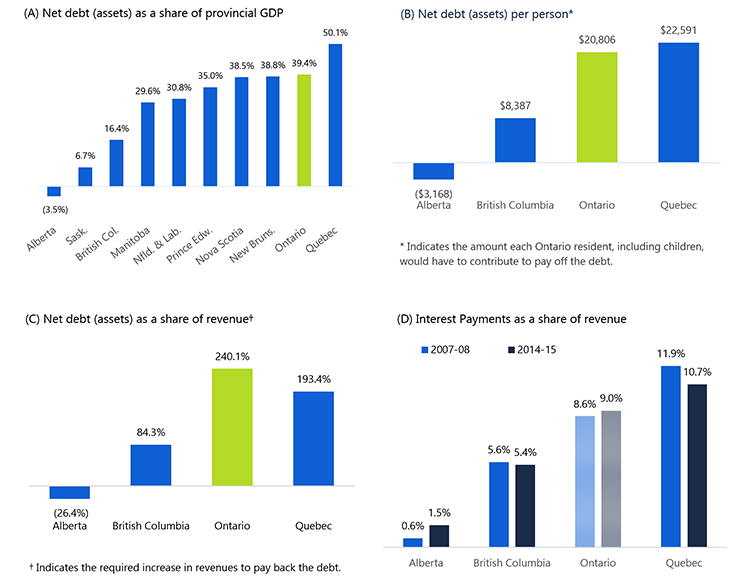 Sources: FAO analysis of data from the 2014-15 Fiscal Reference Tables, the most recent available, and Statistics Canada.

What are the characteristics of Ontario’s liabilities?

The Province’s liabilities, $368 billion at March 31, 2015,[9] include market and non-market debt (Figure 3). Non-market debt was 14 per cent of Ontario’s liabilities.[10] Non-market debt includes accounts payable and accrued liabilities, other long-term financing, deferred revenue and capital contributions, pensions and other employee future benefits, and other liabilities such as power purchase contracts (see Glossary at the end of this commentary for a definition of these terms).

Figure 3: Composition of Ontario’s Liabilities as of March 31, 2015 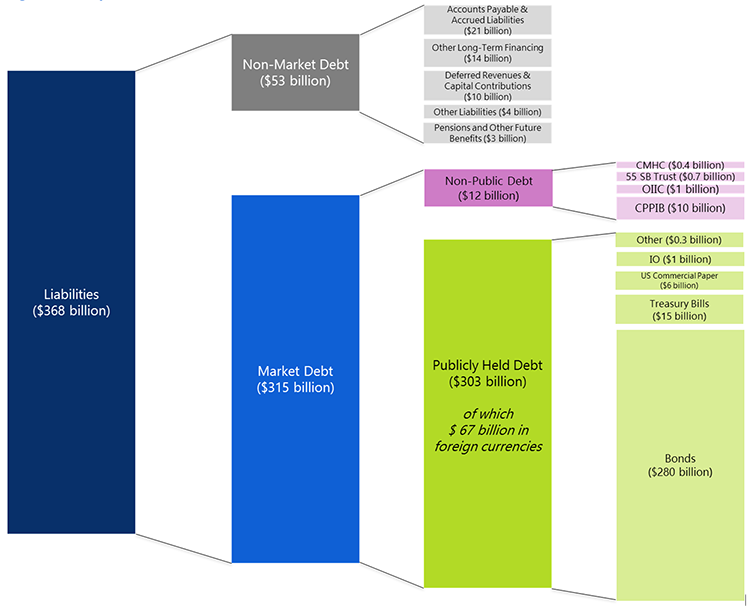 Market debt has two components: publicly held (96 per cent) and non-public debt (four per cent). As of April 2016, the Province was obligated to repay its market debt over the period of 2016 to 2062 and, at the time of writing, pays an effective interest rate of 3.6 per cent.[11]

Publicly held debt consists mainly of medium- and long-term bonds issued domestically and abroad, and short-term debt (treasury bills and US-dollar commercial paper). Public investors, such as investment funds and insurance companies, and certain government-owned corporations typically hold the Province’s public debt.[12] Part of the Province’s publicly held debt is issued in foreign currencies. As of April 2016, such debt had an effective interest rate of 2.4 per cent, compared to 3.8 per cent for debt denominated in Canadian dollars.[13]

The non-public component of market debt consists of “debt instruments issued mainly to the Canada Pension Plan Investment Board. This debt is not marketable and cannot be traded.”[14] Non-public debt bears an effective interest rate of 4.9 per cent, higher than the 3.6 per cent on publicly held debt.[15]

What are the risks associated with Ontario’s level of debt?

Ultimately, higher interest rates would lead to greater interest expense for the Province on both new and existing debt (the variable portion). According to the 2016 budget, a one percentage point increase (e.g. from 3.6 to 4.6 per cent) in interest rates would increase interest payments by about $350 million in 2016-17, more than the budgets of the Ministries of Labour and Aboriginal Affairs. This risk is in part affected by the amount of existing debt maturing. For instance, a significant share (38 per cent of the outstanding amount, excluding interest) of the Ontario’s debt will mature by 2020.[17]

Accounts payable and Accrued Liabilities: include items such as Transfer Payments; Interest on Debt; Salaries, Wages and Benefits.

Accumulated Deficit: the difference between liabilities and assets. It represents the total of all past annual deficits minus all past annual surpluses, including prior-period adjustments.

Contingent Liabilities: possible obligations that may result in the future sacrifice of economic benefits arising from existing conditions or situations involving uncertainty, which will ultimately be resolved when one or more future events not wholly within the government’s control occur or fail to occur. Resolution of the uncertainty will confirm the incurrence or non-incurrence of a liability.

Debt: an obligation resulting from the borrowing of money.

Deferred Revenue: unspent externally restricted grants from other levels of government and third parties for operating activities. Deferred revenues are recorded into revenue in the period in which the amount received is used for the purposes specified.

Financial Assets: assets that could be used to discharge existing liabilities or finance future operations and are not for consumption in the normal course of operations. Financial assets include cash; an asset that is convertible to cash; a contractual right to receive cash or another financial asset from another party; a temporary or portfolio investment; a financial claim on an outside organization or individual; and inventory.

Other Long-Term Financing: other long-term financing comprises the total debt of the Broader Public Sector and obligations under Alternative Financing and Procurement arrangements.

Pensions and Other Employee Future Benefits: liabilities for selected employee future benefits (such as pensions, non-pension retirement benefits, post-employment benefits, compensated absences and termination benefits) represent the government’s share of the actuarial present values of benefits attributed to services rendered by employees and former employees, less its share of the assets of the plans.

[2] Or more specifically, liabilities are obligations “arising from past transactions or events, the settlement of which may result in the transfer or use of assets, provision of services, or other yielding of economic benefits in the future.” (Kieso et al (2013) Intermediate Accounting. Wiley. 10th Edition, p. 1602.)

[9] This estimate of Ontario’s liabilities is the most recent from the (2014-15) Public Accounts.

[10] The Ontario Financing Authority (OFA) indicated that, although there is some interest paid (bank charges for example) on non-market debt, the effective interest rate on such debt is not calculated.

[12] FAO analysis of data from Bloomberg as of April 27, 2016 and 2014-15 Ontario Public Accounts. However, it is difficult to determine who exactly owns Ontario’s publicly held debt at a given time, since investors are constantly trading debt instruments (bonds, bills, and paper).

[13] Despite the weight of foreign currency debt in market debt (19 per cent), Ontario has a limited exposure to foreign currency risk thanks to hedging. The Ontario Financing Authority indicated that the effective interest rate on debt in foreign currencies includes hedging costs.

[15] FAO analysis of data from the Ontario Financing Authority.

[16] Moody’s recently re-affirmed Ontario's ratings, and revised the outlook on the ratings to stable from negative. April 26, 2016. Ontario’s credit risk is represented by its credit spread, which could be described as the difference in the interest rates paid by the federal government (which has a higher credit rating) and those paid by the Province.
For example, according to recent data from the OFA, Ontario is paying 62 basis points (bps) over the 5-year Government of Canada bond; 83 bps over the 10-year bond; and 95 bps over the 30-year bond.

Figure 2 – Panel A: This chart shows the ratios of net debt (or net assets) to GDP for all Canadian provinces in 2014-15. According to this measure, Ontario was the second most indebted province in Canada, after Quebec, with net debt representing 39.4 per cent of GDP.

Figure 2 – Panel B: This chart shows the net debt (or net assets) per person for Ontario, Quebec, Alberta and British Columbia. This measure indicates each Ontario resident, including children, would have to contribute $20,806 to pay off the debt. According to this measure, Ontario has the second highest debt burden among the provinces considered here.

Figure 2 – Panel C: This chart shows the share of net debt (or net assets) in revenue for Ontario, Quebec, Alberta and British Columbia. This measures suggests that Ontario had the highest debt burden among the four provinces considered in 2014-15, carrying $2.40 in net debt for each dollar of provincial revenue. This compares to $1.93 for Quebec, $0.84 for British Columbia. In contrast, Alberta held $0.26 in net assets for each dollar of revenue.