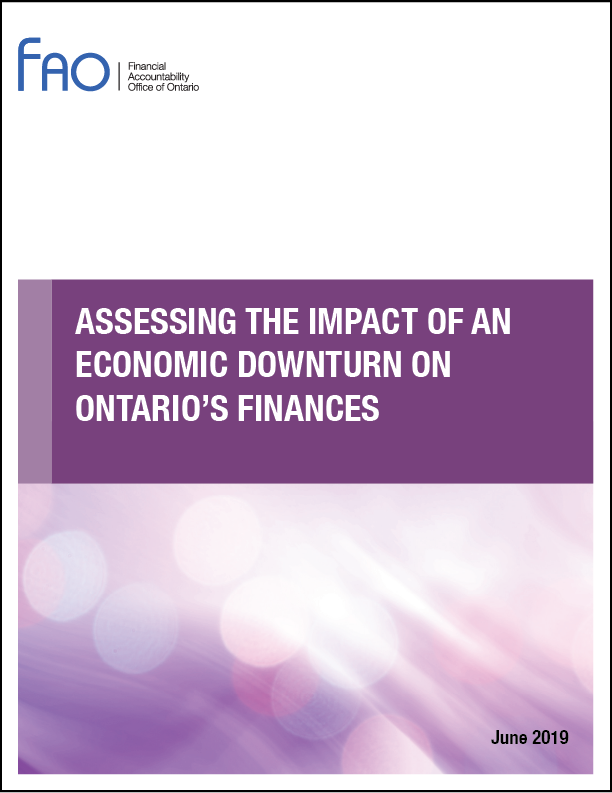 Assessing the Impact of an Economic Downturn on Ontario’s Finances

In the 2019 Spring Economic and Budget Outlook (EBO), the FAO projected slower but steady economic growth over the next five years. However, the FAO’s outlook for slower growth also occurs in an environment of elevated economic risks that include heavily indebted Ontario households and an uncertain trade and investment environment.

In this economic context, the Ontario government’s 2019 budget plan included provisions to introduce several significant but unannounced policy measures[3], while also committing to balance the budget by 2023-24 and limiting Ontario’s net debt-to-GDP ratio to a maximum of 40.8 per cent. The government’s fiscal plan relies critically on continued, steady revenue growth combined with successfully restraining the growth in program spending.

Given the elevated level of economic risk and the critical importance of continued economic and revenue growth, the FAO assessed the vulnerability of the government’s budget plan to an economic recession.[4] To stress test the Province’s fiscal plan, the FAO constructed a hypothetical, but reasonable, recession scenario to explore the implications of an economic downturn on the government’s finances.

Periods of economic growth are inevitably disrupted by recessions. While there is no single, authoritative technical definition for what constitutes a recession, experts agree that these events are characterized by significant and broad-based declines in economic activity that typically last several quarters.[5]
Based on this description, Ontario has arguably experienced three recessions over the last four decades.[6] The seven-year period of expansion in the 1980s was disrupted by the 1990 recession, and the 16-year expansionary period from the 1990s to the late 2000s was interrupted by the 2008 recession. The current period of expansion, if it continues, would reach at least 15 years – close to the longest expansionary period over the past four decades.

Ontario has experienced three recessions over the last four decades

The ongoing trade conflict between the United States and China continues to present major headwinds for the global economy. Recently, the U.S. government significantly raised tariffs on Chinese goods imported into the United States, escalating the trade conflict. Higher tariffs impose higher prices on U.S. consumers and businesses, potentially forcing both sectors to scale back spending.[7] Several U.S. economic forecasters – Morgan Stanley, JPMorgan and Goldman Sachs Group[8] – have indicated that higher tariffs would curtail economic growth and raise the risk of a recession in 2020. Given Ontario’s reliance on international trade, a downturn in the global economy, and in particular the United States, would have significant consequences for Ontario

Domestically, the most significant economic risk has been the sharp rise in Ontario household debt to record levels. An external event which slows wage growth or increases unemployment could cause Ontario households to scale back spending dramatically, amplifying the effects of an economic downturn. Elevated levels of household debt, combined with high corporate and government debt levels, could also prolong a recession by limiting the effects of measures designed to stimulate the economy.

Consistent with the views of other economic forecasters[9], the FAO’s recession scenario assumes that a moderate economic downturn would begin in the second half of 2020, with real GDP declining by just over 1 per cent at annual rates.[10] This hypothetical recession is assumed to be relatively short-lived, with the economy regaining the lost ground by 2023.

The FAO recession scenario assumes a relatively moderate decline compared to previous Ontario recessions and a comparatively quicker recovery. Under the scenario, real GDP is assumed to be about 3 per cent lower at the trough compared to its level in 2019. In contrast, over the past three recessionary periods (in 1982, 1990 and 2008), real GDP declined by between 5 and 7 per cent from its pre-recession high.

Comparison of FAO’s recession scenario with past Ontario recessions

Under the recession scenario, the FAO assumes that all components of the economy – including household spending, business investment and net trade –  weaken proportionally, leading to a decline in real GDP relative to the FAO’s base case projection.[11] As a result of the lower economic output, businesses would reduce employment, leading to a rise in Ontario’s unemployment rate by 1 percentage point. The weaker labour market would lead to stagnant growth in wages in 2020.

Lower employment and wage growth would weaken gains in labour income, the largest component of nominal GDP. With corporate profits also declining[12], Ontario’s nominal GDP – the broadest measure of the government’s revenue base – would be expected to fall by 3.0 per cent in 2020 compared to the FAO’s base case projection.

With lower wage pressures and unused economic capacity, consumer price inflation would be subdued, averaging 1.5 per cent in 2020. In response to the lower inflation, the FAO assumes the Bank of Canada would reduce its overnight rate by 50 basis points in 2020, while non-discretionary government spending (such as employment insurance and social assistance) would increase automatically (see Fiscal Impact section).

Lower interest rates would be expected to boost household spending and business investment, while higher non-discretionary government spending would have a direct positive impact on the economy. As a result, Ontario’s economy would begin to stabilize in 2021, leading to a full recovery by 2023.

In the 2019 Spring EBO, the FAO projected Ontario’s budget will rapidly improve to a surplus of $6.4 billion by 2023-24. Importantly, this projection excluded the relatively large unannounced revenue reductions and spending measures that were incorporated into the government’s 2019 budget plan.[15] Including these unannounced measures, the FAO estimates that the Ontario budget surplus would be reduced to $0.9 billion in 2023-24, given the EBO forecast for steady, but moderate economic growth.

In a recession, governments generally provide additional fiscal stimulus, such as tax cuts or spending increases, to stabilize the economy.[16] Since the exact size and nature of the fiscal stimulus is uncertain, the FAO’s recession scenario assumes that the government would implement these unannounced measures from the 2019 budget to stimulate an economic recovery.

Under the FAO’s recession scenario, weaker economic activity would reduce the Province’s revenues while spending on some non-discretionary programs would be expected to increase. The FAO estimates that lower labour income, corporate profits and household spending combined with a reduction in tax yields[17] would lower Ontario’s total revenues by $7.7 billion in 2020-21 and $10.1 billion in 2021-22.

At the same time, some non-discretionary government spending, such as employment training and social assistance, would be expected to increase in response to the recession. In total, the FAO estimates that program spending would increase by a relatively moderate $0.4 billion in 2020-21. In addition, interest on debt expenses would also be marginally higher, as the increased borrowing from higher deficits is partially offset by lower interest rates.

Impact on revenue and expenses

Taken together, the FAO estimates that the economic drag caused by the recession would increase the deficit from $7.4 billion in 2020-21 to $15.7 billion.[18] The deficit would be expected to worsen to $16.5 billion in 2021-22 before beginning to improve over the following two years as the economy recovers. However, a budget deficit of $4.3 billion would still be expected in 2023-24, the year the government has committed to achieving a balanced budget, based on the 2019 budget plan.

A moderate recession would lead to higher deficits over the outlook

Higher deficits under the recession scenario would result in $8.3 billion more debt in 2020-21, rising to $30.7 billion by 2023-24. As a result of higher debt and slower economic growth, the net debt-to-GDP ratio would increase to 44.9 per cent by 2021-22. While the FAO projects modest improvements over the following two years, Ontario’s net debt-to-GDP ratio would be expected to remain well above the government’s ceiling of 40.8 per cent over the outlook.

Based on the FAO’s analysis, the government’s fiscal plan is vulnerable to an economic downturn. Even in the relatively moderate recession assumed for this analysis, Ontario’s budget deficit would be expected to increase significantly, exceeding $16.5 billion (or 1.8 per cent of GDP[19]) in 2021-22. While the deficit would be expected to improve as the economy recovers, the accumulated debt would remain on the provincial balance sheet as a legacy of the recession. Given the significant deterioration in the Province’s fiscal position, the government’s commitments to balance the budget by 2023-24 and limit Ontario’s net debt-to-GDP ratio to a maximum of 40.8 per cent would likely not be achieved.

Established by the Financial Accountability Officer Act, 2013, the Financial Accountability Office (FAO) provides independent analysis on the state of the Province’s finances, trends in the provincial economy and related matters important to the Legislative Assembly of Ontario. Visit our website at http://www.fao-on.org/en/ and follow us on Twitter at https://twitter.com/InfoFAO.

1 See page 23 in the 2019 Spring Economic and Budget Outlook (EBO)  for the FAO’s baseline budget balance projection including and excluding unannounced measures.

2 This scenario is consistent with the views of a number of economic forecasters, who believe that the next downturn in the United States or Canada will be mild compared to past recessions. For example, see Yield curve not the only recession indicator, Capital Economics, US Economics Update, March 2019 and TD Economics, Canadian ‘Solo’ Recession Risk: Rhetoric vs Reality, March 2019.

3 Beginning in 2021-22, the 2019 Ontario Budget incorporates provisions for unannounced revenue reductions and spending measures. See pages 15 and 19 in the 2019 Spring EBO for more details.

9 Many experts view that the next downturn in the United States or Canada will be mild compared to past recessions. For example, see Yield curve not the only recession indicator, Capital Economics, US Economics Update, March 2019 and Canadian ‘Solo’ Recession Risk: Rhetoric vs Reality, TD Economics, March 2019.

11 The base case projection is the FAO’s economic outlook in the 2019 Spring EBO.

12 Based on past experiences, corporate profits typically decline steeply during recessions, but post quicker recoveries than other sectors of the economy. Accordingly, the FAO assumes that corporate profits would decline by 11 per cent in 2020 and then fully recover by 2023.

13 In their most recent Financial System Review, the Bank of Canada included elevated corporate indebtedness in Canada as a key vulnerability for the economy.

15 In the FAO’s baseline projection, unannounced measures in the 2019 budget plan are excluded, as these measures are not reflected in current legislation and have not been formally proposed by the government.

17 Based on an analysis of previous recessions, the tax revenue generated from a given economic base (i.e. the tax yield from labour income or corporate profits) declines significantly during recessions. This is particularly the case for corporate income tax revenues during and following recessions due to provisions in the tax system. As a result, the FAO assumed that tax yields from labour income and corporate profits would decline during the recession, leading to a more pronounced decline in tax revenue compared to the decline in incomes.

18 Importantly, if the government were to choose to implement additional fiscal stimulus measures, the deficit would deteriorate further.