On February 5, Statistics Canada released international merchandise trade data for December 2015, which included annual Ontario exports and imports by trade category and country. According to Statistics Canada’s report, Ontario finished 2015 with a seemingly strong 10.5% increase in the value of its international exports,[1] which followed an equally strong 8.0% gain in 2014.

However, the headline number belies the fact that Ontario’s export performance during the year was largely the result of a one-time gain from the 14% depreciation in the Canada-US exchange rate last year, and not a reflection of increases in the actual volume of Ontario’s exports.

Since Canadian exports destined for the U.S. are often priced in U.S. dollars, a lower exchange rate results in Ontario exporters receiving more Canadian dollars for the same volume of exports. As a result, while the value of Ontario’s exports to the U.S. - priced in Canadian dollars - grew by 12.1% in 2015, when expressed in U.S. dollar terms, the value of these same exports actually fell by 3.2%. 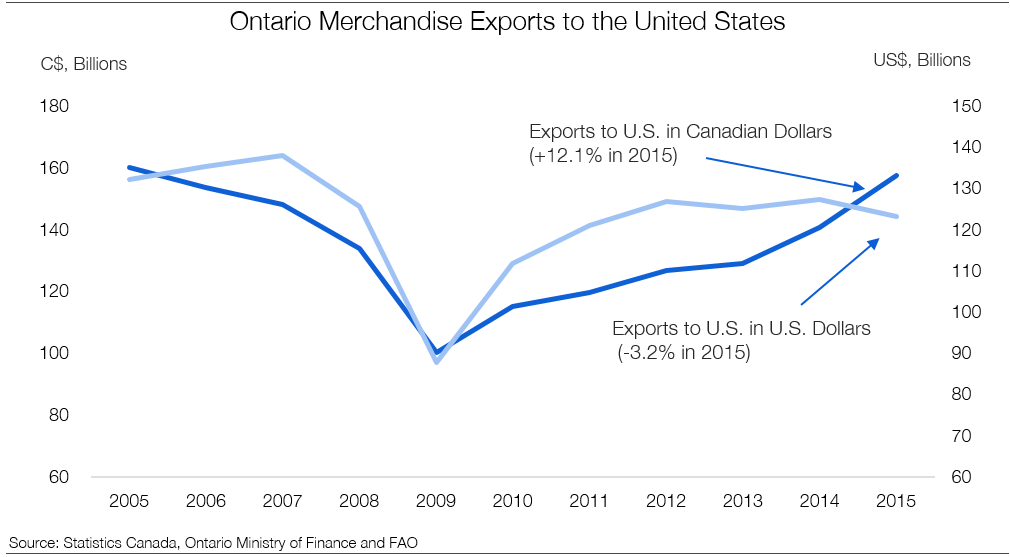 It was widely expected that the sharp drop in the value of the Canadian dollar since 2012 would improve Ontario’s competitiveness in the U.S. market, allowing exporters to increase sales in the key U.S. market. On the surface, it might appear that the solid export performance last year is proof that Ontario exporters are finally rebounding from the 2008-2009 global recession and increasing sales in the U.S. market. However, the drop in the Canadian dollar to date has failed to translate into any significant increases in the volume of Ontario’s international exports, particularly to the U.S.  In fact, Ontario’s U.S. exports - when expressed in U.S. dollars - have been essentially unchanged since the Canadian dollar began depreciating relative to the U.S. dollar in 2013. (see chart)

Estimates of Ontario’s real exports[2] for 2015 will not be available until the release of the Ontario Economic Accounts (OEA) for the fourth quarter of 2015, expected in April.  However, over the first three quarters of 2015, Ontario’s real international exports have grown only marginally, trailing growth in other sectors such as consumer spending and residential investment.

As a result, Ontario’s trade performance last year was disappointing, since exports are not expected to have contributed to Ontario’s overall real economic growth (estimated to be about 2.4%). Importantly, the anticipated boost to Ontario’s net exports has yet to materialize as we head into 2016.

[1] In current or nominal dollars.