Ontario’s labour market performed strongly in 2019, posting the largest increase in the level of employment on record. The annual unemployment rate remained at 5.6 per cent, unchanged from 2018, but the lowest rate since 1989. The strength in job creation was accompanied by sustained growth in average wages, and an increase in the proportion of Ontarians participating in the workforce for only the second time in the past 10 years.

However, Ontario’s labour market continues to face important challenges, including an uneven distribution of labour market gains across the province’s communities, a surge in self-employment which can be precarious, and a decline in average hours worked per employee, partially reflecting rising part-time employment.

Ontario’s economy created a strong 210,000 net new jobs in 2019, the largest increase in the level of employment on record.[1] Despite the strong pace of job creation, the annual unemployment rate held steady at 5.6 per cent, as a relatively large number of people entered the labour market looking for work.

Strong employment gains, but the unemployment rate held steady in 2019

The service sector accounted for the bulk of Ontario’s job creation last year, with employment rising by 196,000, the largest annual gain on record. Within the service sector, job creation was particularly strong in health care and social assistance (54,000, +6.4 per cent) and professional, scientific and technical services (45,000, +7.1 per cent). The goods-producing sector created just 15,000 net new jobs last year, with gains concentrated in construction (18,000, +3.4 per cent) and agriculture (5,000, +7.2 per cent). Manufacturing jobs declined by 6,500 in 2019, marking the second consecutive year of lower employment.

Solid wage gains were recorded in professional, scientific, and technical services (+5.8 per cent), manufacturing (+5.7 per cent), and construction (+5.5 per cent). In contrast, workers in the broader public sector recorded more modest wage gains. For example, wages for health care and social assistance workers increased by just 0.5 per cent on average, while average education sector wages increased by 1.7 per cent.

Wages for female workers increased by 3.8 per cent in 2019, outpacing a 3.3 per cent rise for male workers, and marking the third consecutive year of a declining gender wage gap. 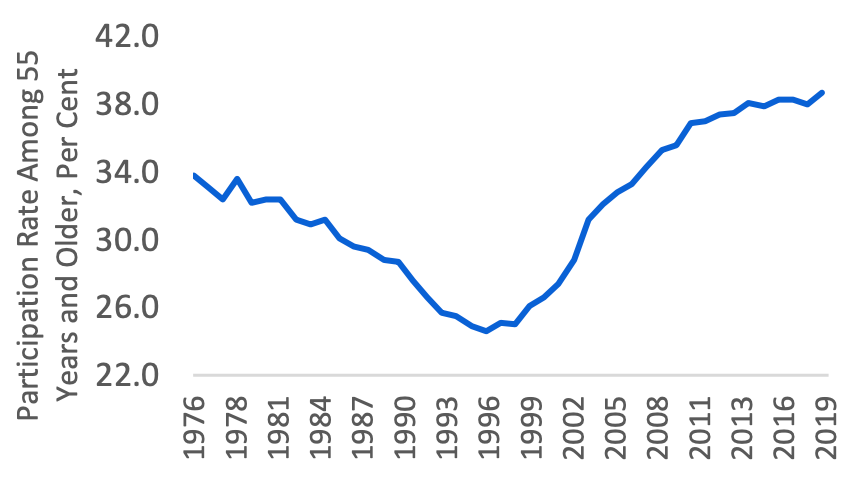 The most notable increase in the labour force participation rate was for older workers (55 years and over), with the rate reaching 38.7 per cent, the highest on record. The decision by an increasing proportion of older Ontarians to remain in the workforce longer has been an important trend in the Ontario labour market since the late 1990s. Research has indicated that this trend reflects several factors including the rising educational attainment of older workers, the shift of employment towards less physically demanding jobs in the service sector, economic circumstances and improvements in health outcomes.[2]

Established by the Financial Accountability Officer Act, 2013, the Financial Accountability Office (FAO) provides independent analysis on the state of the Province’s finances, trends in the provincial economy and related matters important to the Legislative Assembly of Ontario. Visit our website at http://www.fao-on.org/en/ and follow us on Twitter at https://twitter.com/InfoFAO.

Solid wage growth sustained for two consecutive years
This graph shows nominal growth in average hourly wages for all workers from 2000 to 2019. Wages increased sharply by 3.6 per cent in 2019, the largest increase since 2008.

[1] All labour market statistics in this note are taken from Statistics Canada’s Labour Force Survey (LFS) and reported on an average annual basis. The current LFS began in 1976.

[4] For a detailed discussion on self-employment, see OECD (2017), Is self-employment quality work?, in The Missing Entrepreneurs 2017: Policies for Inclusive Entrepreneurship and Olena Kostyshyna, C. L. (2019), The Size and Characteristics of Informal (“Gig”) Work in Canada.