Posted in: Employment and Labour Markets

Ontario’s labour market performed strongly in 2018, with robust gains in full-time employment and a continued decline in the annual unemployment rate, which reached lows not seen since the late 1980s. These positive results were also accompanied by an acceleration in wage growth, especially for part-time workers, youth and women. However, beyond the headline results, Ontario’s labour market continues to face important challenges, including elevated long-term unemployment, relatively high levels of precarious employment and low labour force participation rates.

Strong gains in employment and lowest rate of unemployment since 1989

Job creation was distributed evenly across the public and private sectors of the economy – with both gaining approximately 50,000 jobs. Job gains were also broadly based across goods and service producing sectors. Employment increased in the goods sector, with an addition of 12,600 jobs (+2.5 per cent) in construction and 9,400 jobs (+19.9 per cent) in utilities. The services sector also posted a solid increase with notable job gains in transportation and warehousing (37,700 jobs, +11.0 per cent) and education (24,100 jobs, +4.8 per cent). 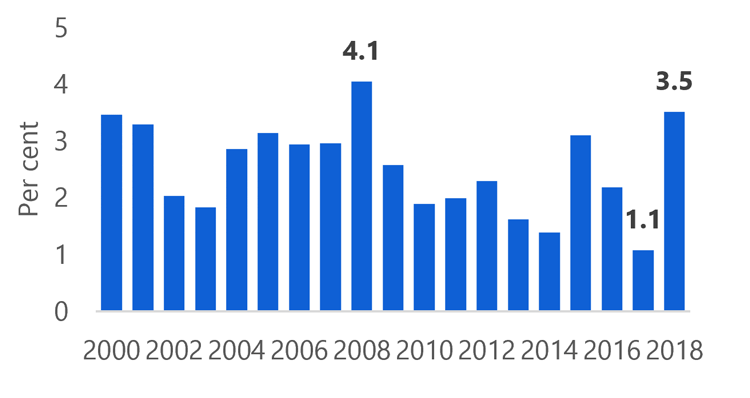 The robust increase in overall wages was due, in large part, to the sharp 18.1 per cent rise in Ontario’s minimum wage from $11.85 to $14.00 on January 1, 2018. Solid demand for workers, combined with a tighter supply of skilled workers also contributed to the strong increase in wages.

Industries with the most notable wage gains included business, building and other support services (12.1 per cent wage increase), accommodation and food services (9.9 per cent), agriculture (9.6 per cent), and forestry (7.9 per cent).

Youth (15-24 years) workers, often associated with minimum wage jobs, saw their wages increase by 10.5 per cent, compared to a year ago. Core age workers (25-54 years) posted wage gains of 3.1 per cent while the wages of older workers’ (55 years and over) increased by 2.2 per cent.

Part-time workers, who also often receive the minimum wage, experienced a strong increase of 6.4 per cent on average, while full-time workers wages increased by 2.9 per cent.

Although Ontario’s labour market posted significant improvements in many headline indicators in 2018, a number of ongoing challenges remain.

Relatively weak labour force participation is even more pronounced for adult Ontario women. In 2018, 81.5 per cent of Ontario’s core-age women were engaged in the workforce, the lowest among provinces. By comparison, the participation rate of core-age Quebec women was 86.7 per cent 2018, more than 5 percentage points higher than in Ontario.

Notably, women with young children in Ontario participate significantly less in the workforce compared to women in other provinces. Only 70.7 per cent[9] of Ontario women with children under the age of six are in the workforce compared to 81.6 per cent in Quebec. This wide gap can largely be explained by the much more generous public support for child care provided in Quebec.[10]

Over the next decade, population aging will slow the growth of Ontario’s labour force, limiting the economic growth potential of the province. Encouraging and facilitating labour force participation in Ontario would improve the incomes of Ontarians and more broadly contribute to stronger economic growth.

About the FAO
Established by the Financial Accountability Officer Act, 2013, the Financial Accountability Office (FAO) provides independent analysis on the state of the Province’s finances, trends in the provincial economy and related matters important to the Legislative Assembly of Ontario. Visit our website at http://www.fao-on.org/en/ and follow us on Twitter at https://twitter.com/InfoFAO.

[1] All labour market statistics in the commentary are reported on an annual basis from Statistics Canada’s Labour Force Survey.

[2] The only exception during this period was in 2015 when Ontario’s labour market lost 32,900 part-time positions.

[4] In particular, older workers continue to face significant challenges finding employment. Nearly 30 per cent of unemployed workers who are 55 or over have been unemployed for longer than six months, compared to 19 per cent for core-age workers.

[5] As discussed in the FAO’s 2017 labour market commentary, temporary workers generally earn 25 per cent less than permanent workers, are generally not eligible for employment benefits and typically experience much lower job security. According to an Ontario government review of working conditions, employees working multiple jobs often do so as a result of insufficient wages from their primary job. Over 60 per cent of multiple job holders earn below the median hourly wage. See: The Changing Workplaces Review (2017), Government of Ontario.

[7] The wages for part-time female employees grew by 7.8 per cent compared to 3.9 per cent for part-time male workers. This strong increase was concentrated among adult female workers in the construction and finance industries.

[8] Total labour force expressed as a percentage of the population ages 15 years and over.

[10] See Pierre Fortin, Quebec’s Childcare Program at 20, Inroads, (2018) for a review of studies analyzing the impact of child care on the female labour force.

Ontario wage growth accelerated sharply in 2018
This graph shows nominal growth in average hourly wages for all workers from 2000 to 2018. Wages increased sharply by 3.5 per cent, up from 1.1 per cent in 2017 and the largest increase since 2008.